Wow, what a week in the markets……I entered a ton of trades that Kyle Dennis and Jason Bond alerted in their Fast5 Alerts and Jackpot trades services (respectively).

I try to document every trade I make with Jason Bond and Kyle Dennis.

For the first time in as long as I can remember, circuit breakers were triggered twice in a week — Monday and Thursday — as the Corona virus concerns crippled stocks.

Now this morning it happened AGAIN.

Despite another dose of Fed intervention, stocks last week suffered their WORST SESSION SINCE BLACK MONDAY back in 1987.

Outside of stocks, meanwhile, the list of people in “self-quarantine” continues to grow, travel bans are being enforced around the globe, public schools are shutting their doors, and many major sports leagues are suspending their seasons.

Against this backdrop, it’d be REAL easy to start panic-selling right now.

But I’m not. Neither is Jason Bond.

Not sure who Jason Bond is? He is a multi-millionaire stock trader that teaches others how to navigate and profit from the markets.

Here is a FREE WEBINAR where you can learn more about Jason Bond and his trading strategies.

Because even though our Zagg (ZAGG) trade in Jason Bond’s Jackpot trades didn’t work out this week, I know there are ways to not only survive this market, but to profit in it.

In fact, just last week Jason Bond Picks subscribers watched Jason Bond grab $3K in just a few hours — as the rest of the market fell off a cliff.

Earlier this week, Jason Bond told his paid subscribers of Weekly Windfalls and Jason Bond Picks that he has struggled with timing so far in 2020.

He was early to the bearish party to start the year; He had been telling clients that something was about to bring the bull market down.

But after losing a few bearish trades in January, Jason Bond got frustrated and decided to rejoin the bullish bandwagon.

And that worked for a while! In fact, he was on a red-hot winning streak before this coronavirus sell-off started in late February.

So, needless to say I’ve been frustrated so far in 2020 as well as Jason and his other subscribers.

BUT Jason Bond prides himself on being an excellent teacher, and that means teaching in good times AND bad.  He claims to want us to learn from his mistakes.

So here are the steps Jason is taking to right the ship… and how he made $3K last week, while the Dow was down about 2,000 points.

The first (and biggest) step I took this week was downsizing my account. Jason explains why this is the biggest step you need to take in this market.

I moved a lot of my cash back to my savings account. No, it won’t earn nearly any interest there, but bleeding it out into the market certainly isn’t a better option.

Well, after giving back a lot of that, he has had enough sleepless nights and pain that he is going back to a smaller account.

I know it sounds crazy, but based on his experience, he actually trades better with a smaller account.

I could go on for days about this — and yes, my experience trading a bigger account is limited, and yes, this is an extraordinary time in the market… but that’s my experience as well.

I’m not sure what it is about that $100K number that works so well for Jason… maybe it’s just the fact he has used that amount of money for most of his career, so that’s what he is comfortable trading with.

Whatever it is, the numbers don’t lie.

Jason really didn’t do a good job with his bigger account and has decided to trade with about $100,000 as of this week.

But if for some reason something goes awry, he said he will drop to just $30,000.

I’ve also started downsizing the number of my positions.

That means I’ll be trading less and more focused.

This isn’t because of the market right now, but because in the past, that’s what I’ve done to be successful.
I find it’s easier to manage a few bigger positions than many smaller positions.

I’ve found I can become overwhelmed when I take on too many trades; 3-4 bigger positions versus 7-10 at any one time has always worked best for me.

Last week, Jason told subscribers of Weekly Windfalls and Jason Bond Picks that he plans to be very exclusive with the stocks he trades.

He wants to get into stocks that are liquid — i.e. – easy to get in and out of.
I’m also only taking the best setups — like Fibonacci retracements, fish hooks, bull flags, rockets, etc.

You can read more about these patterns and how I trade them successfully here.

And with a newfound focus, Jason was able to score a $3K winner during the worst trading day since 1987.

Tizinia Life Sciences (TLSA) stock popped up on Jason’s radar on Wednesday, as the shares jumped to $7.50 after the biotech said its TZLS-501 treatment could be used for coronavirus patients at risk of respiratory failure.

Even with an offering, on Thursday morning, TLSA shares opened well above Wednesday’s open and closing price.

So at noon on Thursday, after TLSA took a REST, Jason told Jason Bond Picks subscribers that he expected TLSA shares to cover the gap and RETEST the $5 level again.

I also suspected short interest was at play, and a heavily shorted stock can often get squeezed higher as bears race to cover.

Here’s the chart Jason was looking at around 12 p.m. ET on Thursday, when the rest of the stock market was getting slaughtered: 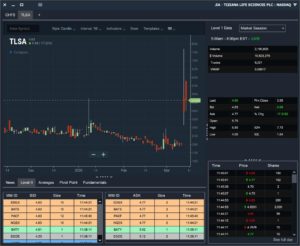 So Jason went ahead and took some profits off the table, selling 3,000 shares at $5.50 apiece.

This proved to me a few things:
1) You can make money in ANY market environment, if you know where to look.

2) I have to trust in my setups as a momentum trader — it’s worked for years, and it will continue to work.

3) You can score HUGE percentage returns even with a TINY POSITION.

I’m re-committing to a personal journal.

I find I’m susceptible at times to breaking my rules — especially when I get in really big trades, which then triggers emotions and leaves me vulnerable to irrational trade decisions.

Sure, at times I could get away with that — but other times it’s led to devastating losses.

So, as I did with TLSA, I plan to log what I’m looking at before a trade — areas of support/resistance, my risk/reward profile, my trading plan, how much cash I allocated — all that.

And, of course, I can go back and do postmortem analyses of each trade — how it played out, where I could’ve improved, the ideal time to take profits or cut losses, etc.

I’ve let emotion get the best of me several times in 2020 — I tried to make losses back quickly by going bigger, and eventually losing.

But keeping a trading log should keep me accountable, and prevent fear and greed from getting the best of me.

For instance, if a pattern breaks and my trading edge is gone, I want to be disciplined — adding to a position with no edge will, of course, lead to more losses.

I mean, sizing into a squeeze is acceptable, if that’s the plan; adding to a losing trade is not.

There have been a few trades where I wanted to get back to green so badly, so quickly, I fell susceptible to human nature and compounded my mistakes.

Option prices climb a hill of “anxiety premium,” and since Jason sells options via credit spreads in Weekly Windfalls, he is on the hunt right now for the perfect setups.

First, a refresher course on implied volatility (IV), which is one of the key components of an option’s price.
In the simplest terms, IV reflects the market’s expectations for a stock’s volatility over a certain period of time.
Rising IV = rising option prices. 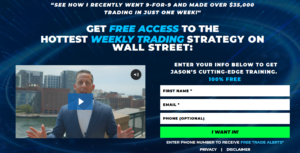 See, when traders expect a stock to be volatile, they’re willing to pay more to buy those options.

That’s because compared to options on a relatively predictable stock, the options on a volatile stock have a better chance of moving into the money (ITM) by expiration, because the shares could make a monster move.

But sometimes, IV can be so high that even if you pick the right direction, it’s hard to capitalize — sellers want to get in when IV and option prices are at their peak.

So Jason Bond is trying to carefully select the best setups, and once he finds one he will be alerting his Weekly Windfalls subscribers.

In this market environment, I’m giving myself the gift of being 100% cash overnight more often.

That means closing my trades before the closing bell, when necessary.

This is because — as you’ve probably witnessed lately — a LOT of things can happen in overnight hours!

And we’ve been halted by circuit breakers recently, which means we can’t even get out of trades at 9:30 a.m. ET if necessary.

So, in order to sleep better at night, I might be doing more day trading (opening and closing in one session) — and I’ll leave the weekend trading to Jeff Williams, who last night launched his Weekend Wiretaps program!

But at RagingBull, they remain confident. Check out my review of RagingBull alerts services here.

Many of the RagingBull guru’s are making BANK in this bad market! Ben Sturgill has been crushing it with his SPY trades recently, and Jeff Williams just saw an 81% return on his biotech stock investment in three days!